Because it works on a pixel-by-pixel basis, canvas is perfectly suited to making extremely detailed images algorithmically. A good example is a starfield background; a very simple one can be built based by merely deciding if a canvas random pixel is white or not.

Unlike most other articles on The New Code, the goal of this piece is not to show a complete example, but to improve the code in incremental steps. This is in contrast to the approach of many of my students, who often seek a single, “perfect” solution rather than taking the time to build from something simple (but well-structured) into a more complex, nuanced production.

Unlike almost every other element, <canvas> should be sized using attributes, rather than CSS; sizing the elements with styles alone causes scaling issues, as the <canvas> element has its own default size that is distorted by using CSS width and height as its only dimension information.

And some CSS to fill it with black:

To start, we’ll identify the canvas, tell JavaScript what context we are drawing in, and determine the total number of stars:

To create the stars themselves, we’ll create a simple loop that draws 1 pixel × 1 pixel squares randomly within the limits of the canvas:

That’s not a bad start, but there are a few problems: the stars are fairly obviously square when viewed closely, all the same brightness, and quite small. Let’s address all of those issues at the same time by drawing circles for the stars; each circle will have a random radius.

Somewhat oddly, canvas does not have a fillCirc method; rather, it draws arcs. Drawing a circle is therefore a task of determining the center and radius of the circle, the starting angle (0) and the ending angle (360).

That’s better, but all our stars are blue-shifted due to the hsla color. We want a range of color.

Distribution of color in the galaxy 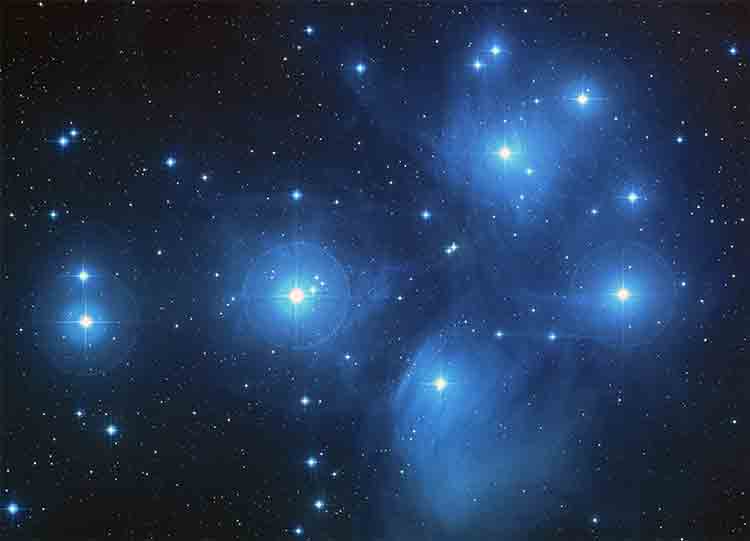 The perceived color of a star depends on its mass and temperature, both of which are functions of its age. Young stars in new galaxies gulp in gas, and shine a bright blue; an older galaxy will be darker, with aged stars appearing as red embers. The color distribution of main sequence stars in our galaxy is fairly typical: three-quarters of them are red and 20% yellow or orange, with the remainder scattered between white and blue.

Our perception of star color distribution is skewed by the fact that cool red stars are much harder to see against the black background of space. For similar reasons, humans do not see green stars: any star emitting green light will also emit red and blue, making it look white.

The getRandom function creates a random integer between two numbers (inclusive): with the hue variable, it randomly selects a value of 0, 60, or 240 (avoiding green), and for saturation, a number from 50 to 100.

To quickly make the <canvas> responsive, add a percentage width in CSS:

The Fine-Grained Nature of Reality

The final result, shown at the top of this article, is pretty good, but does lack a few features:

As written, the starfield could make an excellent random background for a page: you’d just have to use absolute positioning, to ensure that it was always at the “back” of subsequent elements.

Enjoy this piece? I invite you to follow me at twitter.com/dudleystorey to learn more.
Check out the CodePen demo for this article at https://codepen.io/dudleystorey/pen/QjaXKJ