For a long time I’ve been interested in making a text crawl for web pages where the text moved around corners. While there are several ways of accomplishing this - WebGL among them - I wanted a solution that would be fairly straightforward, one that could be written using just HTML and CSS.

The base of the markup consists of two <div> elements with the same content, placed inside another container:

The second element, being a copy of the first, is provided with aria-hidden="true" to hide it from accessibility applications, so the text is only read once.

The inner <div> elements are placed at angle to each other by using 3D rotation, with an appropriate perspective value placed on the parent element. That parent element also has a font-size of 0, to ensure that the inline-block display of the inner elements appears without any gaps:

The inner elements are bent to slightly different angles using transform-origin. They are also given different backgrounds (to simulate light coming from one direction) and color values.

The text inside the elements is surrounded by <span> tags, made wide enough to accommodate a reasonable amount of text. The “clip” to make this text disappear at either end of the divs is created by setting overflow to hidden:

The <span> elements are offset by different amounts to set them at their different positions: the text on the right is moved by 30rem (i.e. the width of the containing <div> element to take it outside the div’s visible area. The text on the left is moved twice that amount, and provided with a subtle text-shadow.

If the parent <div> elements did not have overflow:hidden applied, and the text was in different colors, the initial setup would something like this:

Both text strings are animated. Rather than delaying the motion of the left text string, it moves at the same time as the other string, arriving at its corner at the exact same moment:

linear easing is used so that the text does not speed up or slow down during its motion.

This technique continues to work regardless of whether the following are changed, as you can discover for yourself in the associated CodePen demo:

However, the code does not work well with reduced viewport widths: the text gets smaller and the perspective becomes more acute, making the marquee difficult to read. So, below 993px wide, we change the presentation to a 2D display, showing just one of the <div> elements:

Interestingly, setting an element to display: none will completely stop its animation, which will restart when the element is redisplayed. Because of that, I’ve used another technique to hide the element instead, setting the second div to an opacity and height of 0. That way, if the viewport is narrowed and widened, the animation continues without pause.

Overall I’m quite pleased with the result, and look forward to using the technique in a variation of my CSS cinegraphs. There are a few improvements that could be made, however, most especially in that annoying duplication of content. JavaScript could duplicate the elements and text node easily enough, of course, but it would be nice to see if pseudo-elements could be used to do the same thing.

Enjoy this piece? I invite you to follow me at twitter.com/dudleystorey to learn more.
Check out the CodePen demo for this article at https://codepen.io/dudleystorey/pen/EyPbQp 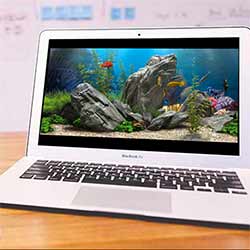