CSS blend modes, clipping paths and filters make a number of effects that were previously available only in PhotoShop possible on the web.

One possibility that combines these CSS properties is overlaying images, for before-and-after comparisons or to achieve other visual effects. An example might be the placement of Hugh Jackman’s face over a contemporary photo of Clint Eastwood; particularly effective since both of them possess such similar bone structure and facial features.

For the first example, the markup looks something like this:

This effectively “sandwiches” a capital X between the two photos. Then, applying the following CSS (in this case, written as Sass):

By placing mix-blend-mode: multiply on the last image, it blends with the yellow “X” and photograph beneath it. As the “X” is a true letter, it is extremely adaptable (and because it uses vw units, responsive); the only problem is that it’s appearance is entirely dependent on the user having that font already installed or embedded. This can never be completely guaranteed, so a better approach might be to clip the upper image. Using much the same markup, for the second example:

The opening CSS remains the same, so I’ll just concentrate on the last image in the markup, sans vendor prefixes:

I’ve covered the SVG equivalent markup necessary for Firefox to clip the image in an earlier article:

The result can be quite effective… and entirely written in CSS.

<figure> and <figcaption> have been used in the examples as “placeholder markup”: if you decided to use more than a single letter for a blended caption, <figcaption> would be the appropriate markup. However, as Selen points out in the comments below, there's nothing here that couldn’t be replicated by using <div> elements; the result would also be more semantically correct in most cases.

Enjoy this piece? I invite you to follow me at twitter.com/dudleystorey to learn more.
Check out the CodePen demo for this article at https://codepen.io/dudleystorey/pen/KwLvYg 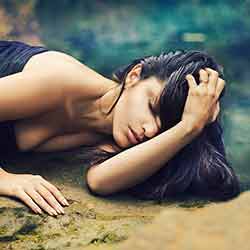 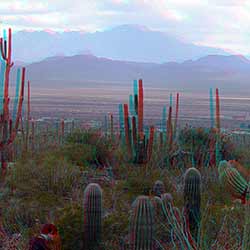